A casual corner to share what's on my mind

So random uh? It's my style

Wasn’t it fun when we were kids to doodle on restaurants’ paper placements with crayons?

You’re probably listening to music in your headphones at work right now. Whether you are powering through your to-do list or brainstorming creative ideas, here is how the tunes you are playing affect how your brain works.

Practicing kung fu with hypothetical enemy in my spare time

Buying someone else headphones is often easier said than done

The new format lets you split the tracks into four elements usually bass, vocals, drums and synths so you can control each one independently.

Winamp disappeared into obscurity, died, then came back to life. But with such a turbulent history, it pays to make sure that the iconic piece of software lives on.

Say hello to Ultimate75th.com and goodbye to your work day. It’s going to take a superhero-like effort to avoid spending the rest of the day browsing through this website celebrating 75 years of Marvel-ousness.

In the video, Allen pretended to be DJing to New Electro & House 2014 Dance Mix #87 in this 15-sec viral video. Everyone had a sure laugh when he suddenly turned the knobs and the flames grew! He was really feeling it! Netizens had a good laugh!

If you want to make sure your productivity comes to a full and complete stop, you should check out Super-Looper, an interactive music site that lets you compose your own loops.

Being a gigging musician and keeping the booking list filled is a pretty tough task, but with today’s launch of Sidestage they now at least have one more method to get the message out.

Beats by Dre–those bright, clunky earphones marked with the coveted lowercase b–enjoy the sexy status once held by the Apple AAPL +0.22%’s white earbuds of the early iPod era. So much so that Apple’s Tim Cook plunked down $3 billion to buy the brand.

A 21st Century Cooler? It’s about time! Regular coolers are boring, break easily and are a hassle to haul around just to carry the ice. The COOLEST cooler is 60 quarts of AWESOME packed with so much fun you’ll look for excuses to get outside more often.

If you like the idea beyond Forgotify, a web app that surfaces music that has never been played on Spotify, but want more control on what you discover, then you may be interested to hear of The Long Tail an app that pulls the 50 least played Spotify tracks of any artist into a playlist.

This is the performance of “The Company” at Vibe XIX 2014. Can’t tell if they are robots or humans. This dance routine is so impressive That it looks unreal. Check this out!

You know that one iPhone ringtone? Yeah. That one. Some call it “Opening”; others call it “That one damned song thats woken me up every morning since iOS 7 came out.”

Due to heavily usage, I have unwrapped another set, damn I burnt earbud like a boss. Pioneer SE-CL501-M Fully Enclosed Dynamic In Ear Headphones.

After staying relatively quiet for most of 2013, Skrillex is back and ready to boogie. Today, he’s dropped dates for “The Mothership Tour”, a massive North American jaunt that includes headlining shows and festival appearances through the end of August.

This is the shit y’all, check this out. 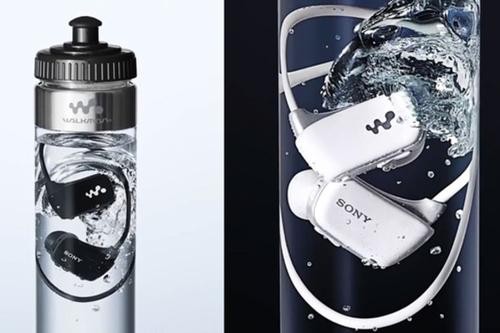 Sony sells its waterproof mp3 player inside a bottle of water

What does a company do to convince potential customers that its product is genuinely waterproof? Well, aside from saying so on the packaging, it can sell the product already immersed inside a bottle of water.